The Dwarf Minke Whales of The Great Barrier Reef We are currently preparing our next Dwarf Minke Whale watching programme for 2013/14. It will be posted shortly. If you would like to discuss this at all before the programme is posted please call or email us.  There will be a write up about the Dwarf Minke Whales of The Great...  READ MORE A new global community has been formed to protect whales and dolphins across the world’s oceans.

The alliance was announced following the World Whale Conference held last week at the Hilton Brighton Metropole, Brighton, UK, the hotel where the original moratorium on whaling was signed in 1982.

Over 75 leading environmental and animal protection groups and businesses have committed to Save the Whales: Reloaded, including World Society for the Protection of Animals (WSPA), Ocean Alliance, Earthrace Conservation, the American Cetacean Society and many more. The new global alliance will identify and work together to protect whales and dolphins in all of the places where they most need help.

“Today marks an historic move forward as we galvanise the passion and commitment of the original Save the Whales campaign with Save the Whales: Reloaded”.

“As an active and influential global community we will be using our collective energy and expertise to identify and ring fence new ‘Areas of Concern’ for whales and dolphins across the globe.  Today, we are naming the first three areas we have agreed to tackle and we are already planning to announce thousands more as we seek to ensure the long term protection of all whales, dolphins and porpoises, collectively known as cetaceans.”

Identifying key locations where whales and dolphins are currently under threat, the alliance has announced the first three sites targeted for immediate action.  These are:

Whale and Dolphin Conservation (WDC), Canadian Marine Environment Protection Society, and Cetacean Society International have come together with some 20 other NGO and business supporters from around the world to re-affirm the need for whaling to end in the Southern Ocean Sanctuary and to make it a true sanctuary for whales.

The call comes in a week when the world’s eyes are trained on the Southern Ocean where, in Hobart, Australia, the fate of the proposed 2.4 million km2 Ross Sea Region Marine Reserve and Antarctic reserve network is being decided by CCAMLR — the Commission for the Conservation of Antarctic Living Marine Resources.

Says Erich Hoyt, Whale and Dolphin Conservation (WDC) Research Fellow and author of Marine Protected Areas for Whales, Dolphins and Porpoises: “We are calling on every country to make this commitment to whales and the marine ecosystem, stop all fishing there, and to give the strongest possible message for conservation in the global commons and high seas of the great Southern Ocean. This is our big chance; we can’t blow it.”

Save the Whales: Reloaded supporters will campaign against the ongoing slaughter of whales within the sanctuary by the Japanese whaling fleet, and for the creation of an Antarctic reserve network.

Twenty two conservation groups and businesses from around the world have joined NABU International in a collective bid to save the Maui and Hector’s dolphins as part of the Save the Whales: Reloaded campaign.

Maui and Hector’s dolphins are the smallest and rarest marine dolphins on earth and live only in New Zealand. Over the past four decades, gillnetting and trawling have decimated them almost to the point of extinction. A ban on gill and trawl nets across the species’ full range in all waters up to 100m deep is crucial if these dolphins are to recover.

“Saving Hector’s and Maui’s dolphins is a race against time. They simply can’t hang on much longer and need action now,” says Dr Barbara Maas, Head of International Species Conservation at NABU International.

“We stand together and call on the New Zealand government to protect Hector‘s and Maui‘s dolphins immediately and fully against harmful fishing methods before it’s too late. If New Zealand fails on this critical conservation challenge, it will damage the country’s reputation forever.”

Save the Whales: Reloaded supporters will petition the New Zealand government to increase the ban on trawling and set nets along the coastline to extend to the species’ full range.

Captured two years ago, wild orca Morgan languishes in Loro Parque, a privately owned entertainment park in the Canary Islands. Now, forty seven charities, businesses and delegates at the World Whale Conference have added their support to the Free Morgan Foundation to save Morgan from captivity as part of the Save the Whales: Reloaded campaign.

Morgan has been subjected to attacks and bullying from other orca and is showing signs of severe stress and abnormal behaviours as a result of being subjected to inhumane conditions.

Dr Ingrid Visser of the Free Morgan Foundation, who has studied wild and captive orca for more than 20 years said: “Morgan is a prime candidate for rehabilitation and release, the only thing that is stopping her return is the money-focused greed of the captivity industry.  Morgan represents all that is wrong with this industry, which claims that keeping these animals is a form of education.  I’ve never heard a word of education out of there yet and all we are teaching is that is ok to abuse animals.”

Save the Whales: Reloaded supporters will join the Free Morgan Foundation in campaigning for a boycott of the park and the release of Morgan back to the wild.

The global community behind Save the Whales: Reloaded was formed at last week’s World Whale Conference which brought together members of the public, whale and dolphin charities, government agencies and businesses from around the world to share ideas and best practice.  A total of 44 charities and 34 whale watching businesses have committed to Save the Whales: Reloaded, representing 27 countries from every continent apart from Antartica.

“Despite the vote in 1982, the world’s whales have not been saved and they are still not safe,” continued Dylan Walker of Planet Whale.  “Whilst whaling is much reduced, it still remains, and these beautiful creatures are also losing ground to a whole plethora of destructive issues, including over-fishing and drowning in nets, pollution, habitat destruction, climate change and being held captive for entertainment in aquariums. As a community we are committed to our cause and our message today to all those involved in cruelty towards cetaceans and destruction of their natural habitats is clear: we will not stop until you stop.”

Planet Whale is also inviting the public to support Save the Whales: Reloaded and help identify the next generation of Marine Protected Areas.  Visitors to last weekend’s WhaleFest 2012 event in Brighton mapped out an astonishing 1,000 areas of the oceans which they would like to see ring fenced for the protection of wild whale and dolphin communities.  Created using an innovative free online mapping tool, these maps will be combined with others drawn by people across the globe to ensure members of the public, governments, charities and other stakeholders all have a say in the future protection of the oceans.

The Southern Ocean Sanctuary was adopted by the International Whaling Commission in 1994 to provide long-term protection for a substantial portion of the world’s remaining whales by protecting their feeding grounds, yet today more whales are hunted here by the Japanese whaling fleet than in any other location on Earth.

Says Erich Hoyt, WDC Research Fellow and author of Marine Protected Areas for Whales, Dolphins and Porpoises: “This area has three ecotypes of Killer Whales, Minke and other whales, penguins, seals and seabirds in one of the most productive ecosystems on Earth.”

This week the world’s eyes are trained on the Southern Ocean where, in Hobart, Australia, the fate of the proposed 2.4 million km2 Ross Sea Region Marine Reserve and Antarctic reserve network is being decided. Every country member of CCAMLR — the Commission for the Conservation of Antarctic Living Marine Resources, the body charged with setting up marine reserves in Antarctic waters — must agree to make it happen.

Since 1970 Hector’s dolphin numbers have dropped by more than three quarters. Maui’s dolphins, a subspecies of Hector’s dolphins off New Zealand‘s North Island, have been decimated to around 55 individuals and are facing imminent extinction.

At current population levels, Maui’s dolphins can only cope with one death due to human activities every 10-23 years, but around five Maui’s dolphins die in fishing nets each year. That’s 75 times more than the sustainable limit.

“Saving Hector’s and Maui’s dolphins is a race against time. They simply can’t hang on much longer and need action now,” says Dr Barbara Maas, Head of International Species Conservation at NABU International.  “The New Zealand government is refusing to afford Maui’s and Hector’s dolphins the necessary protection. Current and newly proposed protection measures are not nearly enough to allow them to recover.”

The world‘s largest conservation assembly, the IUCN World Conservation Congress recently passed a motion that urges New Zealand to extend protection of Maui‘s and Hector‘s dolphins against gillnetting and trawling to a depth of 100 meters offshore to include their entire range. The motion was adopted with 117 governmental and 459 NGO votes in favour. New Zealand alone voted against it.

“Scientists are optimistic that Maui’s can recover if human induced mortality is eliminated”, says Maas. “In line with the IUCN World Conservation Congress’s recommendations, we stand together and call on the New Zealand government to protect Hector‘s and Maui‘s dolphins immediately and fully against harmful fishing methods before it’s too late. If New Zealand fails on this critical conservation challenge, it will damage the country’s reputation forever.”

The New Zealand government has opened a public consultation on the protection of the last 55 Maui’s dolphins which runs until 22November. This process gives everyone the opportunity to have their say by sending a submission through the website www.hectorsdolphins.com.

Forty-seven charities, businesses and delegates at the World Whale Conference have now added their support to the Free Morgan Foundation to save a wild orca from captivity as part of the Save the Whales: Reloaded campaign.

Alone and starving, this young female wild orca was recently taken into captivity.  Now called Morgan, she has been subjected to attacks and bullying from other orca.  Morgan is showing signs of severe stress and abnormal behaviours as a result of being subjected to inhumane conditions.  Originally captured under the guise of rehabilitation and release, she is being kept because the entertainment industry desperately needs a new blood line for their extremely inbred captive orca population.

Held at the entertainment Park, Loro Parque, in the Canary Islands, Spain, Morgan is made to perform circus tricks for a paying audience.  Yet between shows trainers neglect and ignore her and just standby whilst the other orca attack her.  Morgan is not provided veterinarian care for her resulting wounds.

More than 5,500 whales and dolphins have died in captivity.  In the wild, the average age for orca is more than 30 years with some orca known to live well past 80, however, in captivity the average life span is less than 9 years.  Morgan has been in captivity for just over two years, but she has spent more of her life in the open ocean than in a tank.  There is a comprehensive release plan in place to help Morgan return to her family in Norway.

Hector’s and Maui’s dolphins continue to decline in number Morgan has been damaged while in captivity 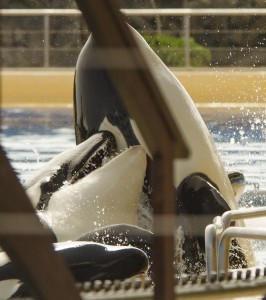 Morgan being bitten by another orca 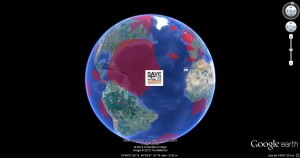 Save the Whales – public map their Areas of Concern for whales Delegates support Save the Whales – Reloaded