Report from the 2013 Baja and Maui whale watching expeditions… 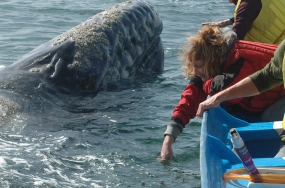 The 2013 Baja and Maui whale watching adventures were one of the best years we have yet had watching the Pacific gray whales of Baja and the humpbacks of Maui. The two tours ran back to back with one week based in Loreto, Baja California Sur followed by a second...  READ MORE

A gray whale that swam from Southern California to Monterey Bay in Central California while tangled in buoys, was found and rescued in Bodega Bay in Northern California by a crab fisherman and his crew, officials said Friday afternoon (link).

That’s several hundred miles of swimming while all tangled up in nets and buoys.

Two Weeks Of Being Tangled Up

The adult whale, known as “June,” became tangled in fishing lines and three buoys in ocean waters off Orange County on April 17.

The 40-ton, 40-foot-long gray whale swam north and hung out off the coast of Big Sur and the Monterey Bay on April 24.

A “disentanglement team” organized by the U.S. Coast Guard and marine experts attempted for several days to free the whale without any luck. The whale slipped away and this week no one knew where it was.

Marine experts worried that the whale’s tale could be bleak, because the longer June was tangled, the more likely it would die.

Crab Fisherman Anello To The Rescue

But on Friday, Capt. Mark Anello and his crew where out crabbing on a boat when they spotted the distressed whale in Bodega Bay, around 68 miles north of San Francisco. That means the whale swam another hundred miles or so after hanging out near Monterey Bay.

From The Associated Press:

A fourth-generation fisherman, Anello noticed something odd near his boat: three buoys floating nearby were moving. He motored closer to investigate.

Anello and two others on his boat the Point Ommaney found the orange and white buoys connected to a whale that measured close to the length of his vessel, said Tony Anello, Mark’s father.

“They come up slowly alongside the whale, and the whale started fighting at first,” the elder Anello said. “Then the whale decided to calm down.”

Using 12-foot, bamboo poles with hooks on the end, Mark Anello and his crew spent 90 minutes freeing the 40-ton mammal, which had been nicknamed “June” by rescuers who had earlier tried to free the marine mammal.

Once the creature was free from the ropes, nets and buoys it took a lap around the vessel.

“The whale circled the boat, surfaced and took off,” Tony Anello said. “It was like it was saying thank you.”

A smaller whale, possible the rescued whale’s baby calf, swam away with June, the captain said.

She said the captain and the crew that rescued June were not part of the network, and that in general she would advise anyone who encounters a tangled whale to report the animal’s location and stay with it but wait for trained rescuers to arrive, not least because such a massive animal can be dangerous.

Generally, tampering with whales qualifies as a federal offense under the Marine Mammal Protection Act. But DeAngelis said Anello and his crew were exempted under the law’s “good Samaritan” clause.

Fishermen Care Deeply About The Sea And Sustainable Fishing

Tony Anello echoed DeAngelis’ fears, saying his son and crew could have been hurt by the large creature. But he also said while fishing gear was the cause of the whale’s woe, many fishermen care deeply about the sea and a sustainable fishery.

“There are fishermen who care about the ocean,” he said. “We are stewards of the ocean and want a sustainable fishery.”

And what a great story to demonstrate how fishermen who make their living from the ocean also have the greatest respect for that ocean. Thank you, Mark Anello, for showing us how this can be done.