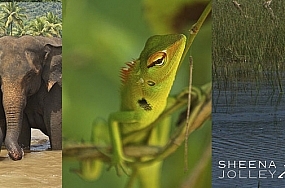 Superb Sri Lanka - wildlife and culture The southeastern part of Sri Lanka March 1st - 7th 2013 Tour Leader: Sheena Jolley Price: €1,550 This photography tour is priced in Euros Sri Lanka is one of the most fantastic island locations for the dedicated wildlife photographer. It has so much; birds, primates, reptiles, elephants,...  READ MORE

Environment Matters – The beginning of the end of Canada’s commercial seal hunt?

Comments being made in certain quarters of the Canadian political hierarchy may indicate that there is a creeping realisation that the negative publicity that Canada receives from its adherence to the annual commercial seal hunt is not worth the financial returns obtained from the selling of seal products.

Ryan Cleary, a New Democrat MP representing Labrador and Newfoundland has recently angered the pro sealing minority by saying that he feels no one wants seal products anymore and going on to say that “Part of our history is also whaling, for example, and the day came when the whaling industry stopped.”

Mr Cleary, much to the consternation of the sealers, added “We know that the world appetite is not there for seal meat, but the world appetite for seal products — I don’t know if it’s there. And you know what? I may be shot for talking about this, and for saying this, but it’s a question we all have to ask.”

A bloody industry that should have been stopped years ago.

The industry appears to be in terminal decline. The Russian Federation, Kazakhstan and Belarus are the latest countries to stop importing seal products with the Russian premier, Vladimir Putin calling the hunt “A bloody industry that should have been stopped years ago.”

In a further blow, Carino, one of the main buyers of seal products in Newfoundland, has just put on hold the proposed purchase of 100,000 pelts this year because of developments in Russia, and discussions looking at selling seal meat in China have run into unspecified difficulties.

In spite of adding that he (Ryan Cleary) and the federal NDP still officially support the seal hunt this softening of attitudes may signal the beginning of the end of a commercial seal hunt that has become a millstone around the neck of successive Ottawa administrations, damaged Canada’s image on the World stage and possibly affected the countries tourism revenues.

Pro sealing factions have reacted angrily trying to shift the emphasis away from a previously held assertion that this should be supported by central government because it was a traditional activity; to one where the seal populations need to be controlled because they eat vast quantities of commercial fish species. According to the sealing community around 12 million tonnes of fish a year!

From a conservation management point of view there may come a time when Canada’s seal populations in the North East and the Maritimes need to be controlled under a properly regulated, scientifically driven programme; but few, it appears, will lament the passing of a brutal and indiscriminate industry that has caused so much damage to Canada’s image abroad. 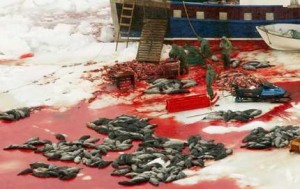 "Processing" seal carcasses on the ice 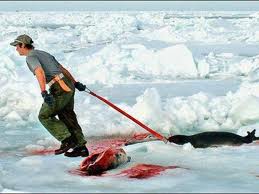 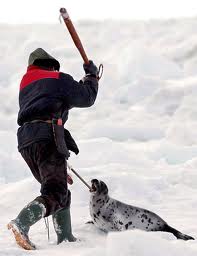 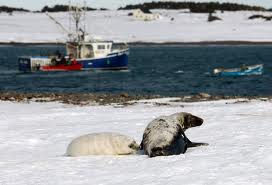 Harp seals and their young await the arrival of the sealers