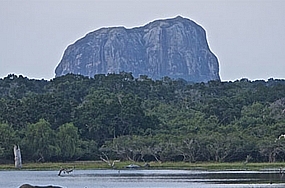 Sri Lanka – LANDSCAPE and CULTURE The southeastern part of Sri Lanka March 1st – 7th 2013 Tour Leader: Chris O'Dell BSC & Nic Slocum PhD, FRGS Price: This photography tour is priced in Euros. The price will be posted shortly. Sri Lanka is one of the most fantastic island locations for the dedicated landscape...  READ MORE

Tour Title: The Humpback Whales of the Pearl Islands

Whales Worldwide have created a unique, island based whale and dolphin watching expedition to one of the World’s finest whale watching destinations; the fabulous Pearl Islands off the beautiful Central American country of Panama. The focus of our attention will be the charismatic humpback whales and dolphins of this outstanding, but little known whale watching destination. The humpbacks we encounter around the Pearl Islands migrate from their Antarctic feeding grounds to these warm Pacific waters to calve and mate and mother/calf combinations are regularly seen on this tour. This is a fully guided, all inclusive whale watching wildlife holiday led by marine zoologist Nic Slocum.

Panama, the jewel of Central America, is a closely guarded secret but has to be one of the top 10 whale watching destinations in the world and a must visit destination for any whale and dolphin watching enthusiast with Pacific humpback whales on their “to see” list. The Archipelago de Las Perlas (The Pearl Islands), our ultimate destination lie just off the coast of Panama and provide us with a fabulous island base from which to board the boats for our daily whale watching expeditions. The humpback whales of Panama are part of a southern hemisphere population that migrate north from their Antarctic feeding grounds during the Antarctic winter to the protected coastal waters of Panama. Frequently with calves in attendance, these charismatic icons of the cetacean world provide us with some lovely views of their acrobatic performances. There are some stunning opportunities for the keen wildlife photographers amongst us.

Other Wildlife and Panama…

Unlike the more tourist oriented Guatemala and Costa Rica, Panama gives you the feeling of an “off the beaten track” destination whose many natural wonders are yet to be discovered with no shortage of beaches, mountains and pristine rainforest to explore. Panama is the isthmus that connects north and south America, bordered to the west by Costa Rica and Colombia to the southeast. The rainforests of Panama have an abundant variety of plants, animals and birds which include caiman, primates and sloths, making this a wildlife enthusiasts dream destination.

Panama is the isthmus that connects north and south America, bordered to the west by Costa Rica and Colombia to the southeast. The capital is Panama city. This part of Latin America was explored and settled by the Spanish in the 16th century. Breaking with Spain in 1821 Panama joined the union of Nueva Granada, Ecuador and Venezuela which was known as the Republic of Gran Colombia. In 1831 Gran Colombia was dissolved but Panama remained joined with Nueva Granada later becoming the Republic of Colombia. In 1903 Panama seceded from Colombia and is now one of the fastest growing economies in Central America. Panamas’ rainforests have an abundant variety of plants, animals and birds which make this a wildlife enthusiasts dream location.

Talk to us directly…

For first-hand information on this tour please call Whales Worldwide on +353 86 120 0027. Alternatively email us at nic@whalesworldwide.com and we will be happy to call you at your convenience and take you through the holiday itinerary in detail.

Nic Slocum has been watching whales from boats for 30 years, from humpbacks and fin whales in Ireland to southern right whales in Patagonia and Pacific gray whales in Mexico. He has been instrumental in putting together one of the most comprehensive codes of conduct for boat based human – whale interactions right down to the species level and is an established authority on the threats currently faced by this unique group of marine mammals.

An experienced naturalist and wildlife guide Nic is best known for his escorted tours taking enthusiasts out, both in Ireland and overseas, to view and photograph whales and dolphins. Nic has maintained a lifelong passion for the conservation of our wildlife and wild places and has appeared as an expert commentator on RTE, Channel 4 and ITV and is regularly called on to comment on national radio.

A zoologist by training, Nic has published articles on conservation related issues in both regional and national newspapers. Nic Slocum divides his time between West Cork, Ireland and other iconic whale watching destinations around the world. He is the CEO of Whale Watch West Cork which runs boat based tours to watch and photograph whales and dolphins off the coast of Southwest Ireland.

Nic is no stranger to adventure and leading groups to remote places on earth. In 1976 he led an expedition across the Sahara Desert to Central Africa and back which earned him Fellowship of the Royal Geographical Society. Nic’s hard work ethic, and detailed knowledge of the species and the locations where they are found ensures his customers have a whale watching experience second to none.

Price: The price for this ‘experience of a lifetime’ is:

(Please note this holiday is priced in Euros)

Day 1. Arrive at Tocumen International Airport late afternoon and transfer to our accommodation, the Balboa Inn at the foot of Panama's main landmark, Cerro Ancón (Ancon Hill) and within easy reach of the historic Panama Canal Administration building. Bird lovers of the group will be dazzled by the array of forest birdlife that visit the neighbourhood and gardens...even during breakfast on the veranda. An early evening briefing is followed by free time when you can explore some local restaurants or simply relax after your flight.

Day 2. We leave promptly after breakfast for our wildlife and scenic boat tour on Gatun Lake which forms part of the Panama Canal. At the time of its completion it was the largest man made lake in the world. During this three hour journey we are likely to see many species of rainforest birds, small primates, sloths and crocodiles where the rainforest comes right down to the lake edge. We stop for lunch at the lovely Gamboa Rainforest resort. This is followed by a gentle "hike" along part of the Camino de Cruces; a road built by the Spanish over 500 years ago to bring their gold from the Pacific side of the Isthmus to the Atlantic side before transport back to Spain. This road runs through the rainforest of the Sobrania National Park with many bird species to marvel at as we go. This is a central American rainforest and wildlife experience that will see you reaching for your binoculars and cameras every step of the way.  We complete our day with a stop at the amazing Miraflores locks and visitor centre - a must for all those with an interest in the building of this famous canal.

Day 3. After breakfast we board our boat transfer out to the Archipélago de Las Perlas (The Pearl Islands). This is our first opportunity to look for humpbacks and other marine wildlife. After our whale watch tour we will stop on Contadora Island (part of the archipelago) where we will transfer to our island accommodation at the Contadora Inn. Later that afternoon will be free time to get to know this delightful two kilometre long island and its fabulous, uncluttered beaches, perhaps taking your first dip in the Pacific Ocean! We do provide some snorkelling lessons for those who have never done it before once we reach Contadora Island...the snorkelling opportunities on the island are legendary.

Day 4, 5 & 6. Leaving around 9am we head out in our whale watching boat looking for humpback mothers and their calves and dolphins. The humpbacks spend July through October among the Pearl Islands in The Bay of Panama. If we are lucky we may encounter breaching animals that are sometimes visible from the island. Dolphin species we may encounter here are the long beaked common dolphins and the pan tropical spotted dolphin. Orca, spinner dolphins and pilot whales are encountered more rarely in these magical Pacific waters. We return to the island between 2pm and 4pm which allows enough time to snorkel off some of the beaches or simply relax in the sun with a drink. After our whale watch tour on Wednesday afternoon we depart the islands and return to Panama city and our accommodation at Balboa Inn in time for a stroll in the gardens looking for the agoutis that rootle among the leaf litter and the fabulous rainforest birds that frequent the garden.

Day 7. No tour to Panama is complete without a tour to see the canal locks. Around 40 ships a day traverse the 50 miles of the Panama Canal and Gatun Lake. Despite the enormous loss of human life during the construction of the canal prior it changed the face of world trade forever. It now permits 4% of world trade to cross between the Pacific and Atlantic oceans negating the need to go down the coast of South America and around Cape Horn. Today, we have an early start and take the Panama canal train towards Colon for a trip to Fort San Lorenzo and Gatun Locks. After a lovely journey along the side of the canal we stop at the docks and marvel at the variety of shipping and the operation of the locks. We then take a leisurely drive out to Fort San Lorenzo looking for wildlife along the way, toucans, sloths, coatimundis and primates as well as many exotic bird species. After exploring the turrets, canons, hallways and moats of this ancient Spanish fort we adjourn to one of the lovely seaside restaurants on the way to Portabelo. We will have the opportunity to visit this World UNESCO heritage site with it's Spanish forts and church of the black Christ.

Day 8. Friday. There are many unique characteristics about our tour to Panama. Apart from the fabulous whales and dolphins around the Pearl Islands and the stunningly beautiful rainforest ecosystems and associated wildlife the remote forests of panama afford us; we have one last "once in a lifetime opportunity". Joining Anne Gordon de Barrigon we visit the village of Emberá Puru in the rainforest. The indigenous Indians of Panama, the Emberá have lived in villages such as these for thousands of years and have a quality of life envied by many. They are a warm and friendly people who enjoy meeting other cultures from around the world. Anne is married to an Emberá man and has lived among them as family for nine years which affords us an utterly unique perspective on their culture and personality that we might otherwise not observe. Many people stay on for the weekend in Panama city flying out on Sunday or choose one of the many other extended tour options open to you in this exciting corner of Latin America.

NB: The daily itinerary may vary depending on prevailing sea conditions.

The Pearl Islands are a two hour boat ride from Panama city. These islands were first settled by the Spanish in the 16th Century. As their name suggests they were famous for the many thousands of pearls that were found there. Today the islands are best known for their lush vegetation, pristine waters, sparsely populated beaches and fascinating marine life - which includes the amazing humpback whales that come here to calve and breed. These pristine Pacific waters are also home to a wide range of dolphin species and it is not uncommon for us to encounter the beautiful pan tropical spotted dolphin on our boat tours. This wonderful part of the Pacific coast of Latin America affords some unique opportunities to view the most charismatic marine mammals on earth. An opportunity open to only a few. We also make sure that we spend some time on the mainland to encounter some of Panama’s unique rainforest wildlife.

What IS NOT included: