Swimming with Humpback Whales on The Silver Bank 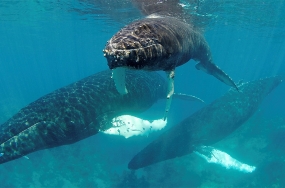 Above: A Gray’s beaked whales, the most common beaked whale to strand in New Zealand, which the stranded animals were originally identified as. However subsequent genetic analysis at The University of Auckland revealed that they were spade-toothed beaked whales. Crown Copyright: Department of Conservation: Te Papa Atawhai (January 2011).

November 2012. Previously only known from a few fragments of jaw bone, the world’s rarest whale, the spade-toothed beaked whale, has been sighted for the first time according to scientists from The University of Auckland.

“This is the first time a spade-toothed beaked whale has been seen as a complete specimen, and we were lucky enough to find two of them. It’s incredible to think that, until recently, such a large animal was concealed in the South Pacific Ocean and shows how little we know about ocean biodiversity.” says lead scientist Dr Rochelle Constantine.

In a study published in Current Biology, the scientists used DNA evidence to prove that a mother whale and her male calf, which stranded in New Zealand in late 2010, were the first animals of their kind ever seen. Since the two animals are the only intact members of their species sighted, the spade-toothed beaked whale is the world’s rarest whale.

Previous evidence was just a few fragments of bone

Until now the only evidence for the species’ existence came from three skull and jaw fragments found around New Zealand and Robinson Crusoe Island, Chile.

The spade-toothed beaked whale was discovered on Pitt Island in the Chatham Islands in 1872, but it wasn’t until 2002 that scientists from The University of Auckland analysed DNA from the three skull fragments, recovered from museum archives, and realised that their genetic profiles were the same and did not correspond to any other known species. There was sufficient DNA evidence to confirm that these three scattered specimens were the bones of the spade-toothed beaked whale. Until the stranding, however, it was unclear whether the species still existed.

On December 31, 2010, a female whale (5.3m long) and male calf (3.5m) stranded and later died on Opape Beach in the Bay of Plenty, New Zealand. After death they were measured, photographed and tissue samples were taken by the Department of Conservation. The animals were initially misidentified as Gray’s beaked whales, the most common beaked whale to strand in New Zealand. However subsequent genetic analysis at The University of Auckland revealed that they were spade-toothed beaked whales.

Following genetic identification the skeletal remains were exhumed, with the permission of Whakatohea Iwi Maori Trust and the Ngai Tama Haua hapu, and taken to the Museum of New Zealand Te Papa Tongarewa.

“This is a real New Zealand story – it’s all linked here, from the discovery of two of the bone fragments to the identification of the species and now the first sighting of the whales,” says Dr Constantine.

“In New Zealand we have a very well established network whereby members of the public report stranded marine mammals to the Department of Conservation, which collects information and sends tissue samples to our laboratory at The University of Auckland.”

“This discovery is a real reward for that work. It demonstrates the value of archival collections and the power of DNA as a forensic tool.”

Reproduced courtesy of Wildlife Extra where it first appeared in the December 2012 issue.